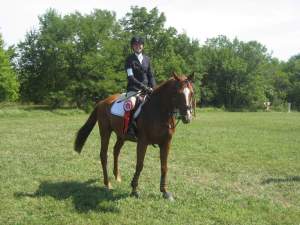 It is with great sadness that I inform my little corner of the blogosphere that my former horse Joker, the red TB gelding, was euthanized on February 27th. Even though I sold him back in 2012, his owner and I became friends and I got to visit him a few times, as well as keep up with how he was doing. 2014 was a bit of a rough year for him, though he seemed to be doing better. Unfortunately that was short lived and something still wasn’t quite right. It was discovered that he had degenerative arthritis at least in his lower neck and right shoulder, likely elsewhere too. His prognosis was very poor, so with his best interest in mind, his owner made the difficult decision to let him cross the rainbow bridge the other day. Rest in peace big guy. I’m so glad I got to share nearly 5 years of your life and that you landed in a place where everyone had your best interest. I’ll never forget you. You taught me so much about, life, love and horses. April 9, 2003-February 27, 2015.